This time around the first three months has been very different to how it was with Bebe. And of course, each child is different, but it’s also that I have more demands with an almost pre-schooler, a blog etc this time. I feel like the time has rushed by faster, that I haven’t taken enough photos or savoured the tiny baby stage which flashes by in an instant. But I also feel more confident and more relaxed (not that I was stressed or anxious with Bebe, but I HAVE raised one human before so I KNOW I can do it again), and this time around I get to not only love on this child, and love watching my husband be an amazing father, I get to also rejoice in watching the love my firstborn has for his brother.

The Fourth Trimester is honestly such a blur no matter what number child it is, those sleepless nights and feeding non stop can really take its toll. So take LOADS of photos Mamas, even if they’re blurry on your iPhone or you feel like you look like an extra in The Walking Dead. Because that’s how you’re going to remember all those beautiful moments.

After being a whole week overdue, a 3 day labour ending in emergency C-section and 10.1lb  Bebe, I wasn’t keen on risking a similar experience so we booked in an elective caesarean at 39 weeks for Bambino. What an incredibly different experience that was! Casually getting up in the morning, curling my hair (don’t judge 😉 I knew I’d be happier with our first photos if I did) dropping Bebe off to his grandparent’s so they could take him to Kindy that day and then driving into hospital… it was quite surreal.

We arrived and were admitted to our room to change and wait to be taken down to theatre. Luckily they were only running half an hour late so we didn’t have much time to think about what was coming!

When we were taken down I walked (not driven around in the bed like last time) and we waited in the waiting room for them to finish the lady before us, the staff would come and say hi and have a chat while we waited to keep the time passing quickly. And soon enough it was our turn, and not long after we became a family of four!

I initially was worried how I’d feel afterwards, knowing  how I felt after the emergency, but an elective was a whole different ball game. I felt great, and so Bebe was able to come up that afternoon and meet his new little baby brother which was amazing.

The first few weeks were quite easy for us, Bambino was a pro feeder just like his brother had been, and added bonus he took easily to a bottle so I could express and Hubby could feed him while I had some extra sleep. I was in less pain and for a shorter period of time while recovering from the C-section and by the time Hubby went back to work I could drive and take Bebe to kindy. I am extremely blessed to have the support of Bebe’s grandparents, and his Beanma would come sit with Bambino while he slept so I could take Bebe to Kindy without having to wake him. That made the whole morning routine so much easier! And so that would become our routine.

With Bebe we discovered Save Our Sleep just before he was 10 weeks old and I stuck to it like a Nazi. The author says 3 days and they’ll be on the routine no worries, for us it took 3 weeks! But we have an amazing routine, sleeping, feeding baby afterwards so it was worth it (I think). With Bambino I knew I would need to be more flexible as we couldn’t sit at home all day so he could sleep, but I did need him to have a semblance of a routine. So I gently pushed times out to get him onto routines, even if it was only 15mins here and there. By 12 weeks he’s basically on the routine, he just wakes earlier and goes to bed earlier. But so did Bebe (and their father is an early riser) so this time instead of pulling my hair out in frustration, I just hit the coffee cup hard in the morning!

We were quite worried about the age gap between the boys, but Bebe is the most caring and gentle big brother, and I just know they’re going to be best friends. There’s pros and cons to any age gap, we’re just so happy we were blessed with our rainbow baby. 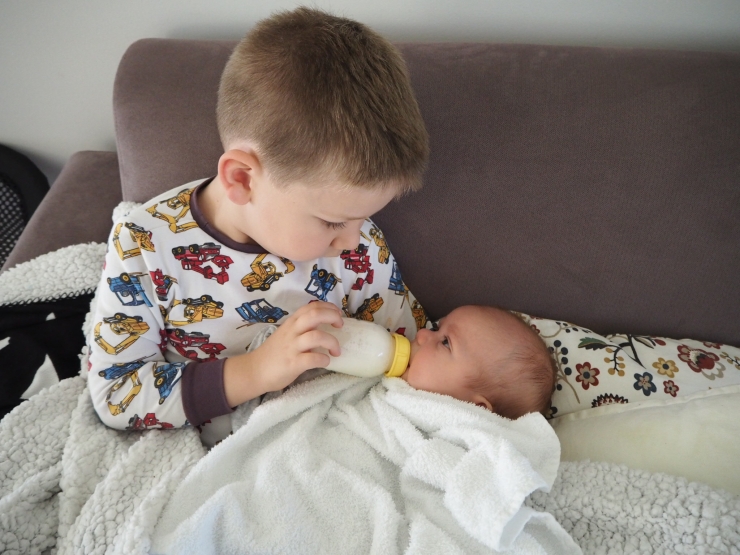 How quickly they change! Blink and [POOF] they’re bigger, older and less baby. But still so so delicious.

Thank you for sharing my four trimesters with me, I hope that I been able to help or entertain in some small way along the way! And although I am definitely no expert, I am always happy to chat with fellow Mamas about my experiences so please feel free to email or DM me!

Hello & welcome! I’m Rachael, a busy Mama of two beautiful boys who loves a fabulous outfit and a cheeky glass of champagne.